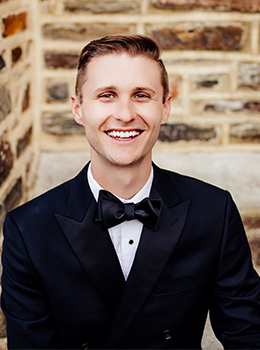 A native of Charlotte, NC, and an experienced organist, choral accompanist, and vocalist, Evan is a much sought after accompanist. He has collaborated with multiple choirs in the New York City and New Jersey areas such as Musica Dulce at St. Patrick’s Cathedral and the All Souls Professional Choir at All Souls Unitarian Church in New York City. He has also concertized with the Baroque Orchestra of New Jersey’s Summer Keyboard Festival and the Old West Organ Society of Boston, MA. As a solo recitalist and guest artist, Evan has performed and collaborated in various musical performances throughout New York City and the greater New Jersey metropolitan area, Boston, Washington D.C., Charlotte, Greenville, Rochester, Montreal, and Arezzo, Rome, and Milan, Italy.

Evan was n amed an E. Power Biggs Fellow for the Organ Historical Society’s 2018 Convention in Rochester, NY. In addition to this fellowship, Mr. Currie was awarded second prize in the american Guild of Organists Brooklyn Chapter’s 2018 George Mathison Memorial Competition and a full stipend to attend the Montreal Organ Festival and McGill Organ Summer Academy. During his studies at the institute, he was selected to participate in a master class with Olivier Latry, titular-organist of Notre-D ame of Paris.

A graduate of Furman University in Greenville, SC, Evan earned a Bachelor of Music degree, cum laude, in organ performance as a student of Dr. Charles Tompkins and served as the Chancel Choir accompanist. In addition to his degree in organ, Evan augmented his studies with secondary concentrations in piano and voice, studying piano with Dr. Ruby Morgan and voice with Mrs. Lisa Barksdale and Dr. Trudy Hines Fuller. He completed additional performance studies in Arezzo, Italy at the Accademia d’ell Arte and served as an intern at The Juilliard School in New York City. Evan holds a Master of Music degree in Organ Performance from the Mason Gross School of the Arts, studying with acclaimed organist, Renée Anne Louprette. During his graduate studies at Mason Gross, Mr. Currie was awarded the Arthur G. Humphrey Memorial Prize for outstanding work in keyboard music. He is also the recipient of the David A. Drinkwater and Gladwell-Durh am scholarship prizes for excellence in keyboard performance.