Worship Matters: The Ones in Robes 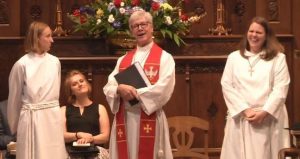 Organizations have to have leaders. Someone directs the organization. He’s the boss. She’s the CEO. He calls the meeting to order. She gets elected President of the board.

Church has lots of leaders. The finance committee has a chairperson. A Sunday School class has its President. But the clergy? It’s the same, but pretty different. In a class you might rotate leadership around, but at church, you don’t get your turn to baptize or preach. In a company you do well and you get promoted. But in church we don’t take our most diligent pray-ers or generous givers and put a robe on them to celebrate Holy Communion.

Even though Jesus did say “Beware of those who go about in long robes” (Luke 20:46), we have our long-robed women and men who are our pastors, our priests, our preachers, and we trust them as our leaders, especially in worship. On Sunday we welcomed two new pastors, Jessica Dayson and Taylor Pryde Barefoot, to our staff. What’s that about, though?

Often people will ask me for prayer, with a little sidebar like “He has a direct line.” Clergy don’t have a direct line. Our prayers differ from yours in no way whatsoever. It’s a privilege to pray, of course – but so it is for all of us. What the clergy have that other don’t is training and hazing. Training: I love the t-shirts that say “I read books. I know things.” Clergy have been intensely schooled in theological books in seminary, and they keep learning and knowing things. They may not know God more intimately than others, but they do know a lot about the Bible, about God, about what’s Methodist and what isn’t, about why some ideas are good theologically and why others might be appealing but aren’t so wise.

And the clergy have been vetted, at length, over years. I see ads for quickie online ordination. Thank God mine was way more stringent. Character, knowledge, wisdom, compassion, the ability to lead, a disciplined life: all these are examined carefully, and repeatedly, before the clergy get ordained. Leading worship isn’t merely reading out of the book.

We can and should also say clergy are called. The form of that call varies. I know clergy who had a “road to Damascus” kind of dramatic moment when they were asked by God to do ministry. Mine was strung out over a long time, a clue here, a comment there, puzzlement, encouragement, trying it, flopping badly, sticking with it, and maybe in retrospect understanding all that as God saying Be a pastor!

In United Methodism, we do not think of the clergy as being somehow sacred, or anointed with some superhuman dose of spirituality. We see what we do as representative: if I go to the hospital and pray with the dying, I don’t go as James the heroic pastor. I go as the one designated to represent the rest of us in God’s church. When I celebrate Holy Communion, I am the one designated to represent the rest of us, saying the blessing at the family table. Even when I preach, I’m not God talking, but the one who represents God’s Word in Scripture and life on behalf of everyone else who would yearn to say true things about God.