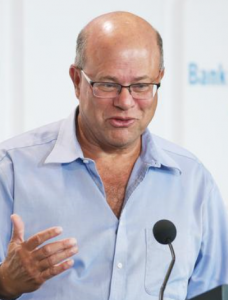 Many Christians have stood on cue in worship to repeat the Apostles’ Creed, words they learned years ago, but have never thought much about them. Some churches have decided that the words of the creed do not appeal to modern consumers; so, more and more churches leave the creed out of worship, finding it too rote, too old, too repetitive.

What we forget is that our minds are wired for brief, memorable creedal statements. I pledge allegiance… Nicholas Lash points out that when we say “I believe in,” it’s actually declaring “I commit myself to, I pledge my allegiance to…” Where do we get our pithy, quotable declarations? A little inventory of conversations at work, in the neighborhood, or even within the privacy of your own head will reveal the real “creed” to which you subscribe. It’s the economy, stupid. It’s who you know. You deserve a break today. Make America great again. Money talks. Look out for number one. Not in my back yard. You get what you pay for. Never give up. Marry up. One is the loneliest number.

Our classic creeds, like the Apostles’ Creed, were designed to help us say true things about God. I wonder if the repetition in weekly worship of enduring, deep truths about God’s story might help us combat the fake, semi-truths that are vapid and self-serving, and help us speak truly of God, which matters in perilous times like ours. Every time we say the Apostles’ Creed, or the Nicene or another of Christendom’s historic creeds, we step into a long, steady river, the great two thousand year story of believers, missionaries, and martyrs. When I say “I believe in God…,” I become part of something bigger than myself. Faith has content; it is old, time-tested.

The Creed is a story – the Bible’s story. A legend circulated in the early Church: after the Spirit descended on the disciples at Pentecost, Peter said “I believe in God the Father Almighty…” Andrew added, “and in Jesus Christ his only Son our Lord.” And so they went around the table, a dozen disciples, a dozen sentences forming the Apostles’ Creed. This impulse to trace the Creed to the living characters of the Bible is on target. “What the Scriptures say at length, the Creed says briefly” (Nicholas Lash). The Apostles’ Creed is a quick summary of the sixty six books of the Bible, a bird’s eye view of the high points of the story spanning thousands of years. How easy it is to lose the story line in the 1,189 chapters and 31,000+ verses of the Bible; the Creed helps us detect the plot, and get our arms around the big story.

The Creed, in a surprising way, invites doubt, and God knows how much doubt we have when we’re outside church. The Creed was first composed as a set of questions, and for people with plenty of questions.

As we recite the creed week by week, it may be helpful to ponder a particular phrase. I loved it when David Tepper had just bought the Carolina Panthers – and in his press conference he fixated on the Pledge of Allegiance’s phrase, “with liberty and justice for all,” clarifying his commitments to care for others. The Creed invites such reflection.