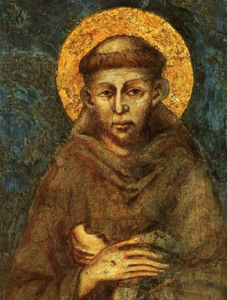 We never can think I’ve done enough for God, I have offered enough of myself to God. God wants more – or actually, all of you, all you have, all you are. It’s not costly or a radical sacrifice. It’s what you were made for.

Francis had grown up as an immensely popular, cool, up and coming young man. He feigned a French accent, and sang hip French romantic ballads; all the young men and woman adored him. But he heard a yearning, a calling, deep inside that wouldn’t let him go. Finally he realized that he couldn’t do what God was asking of him as long as he continued along his upwardly mobile path of success and coolness. His father Pietro was grooming him to take over the booming family cloth business; he was off on business junkets to France regularly. But to have time, room, energy and the heart for God’s call, Francis had to give that up. He learned, quickly, that divesting himself of his things, and his career, was not a cross to the borne, but a liberation. He learned he could live on way, way, way less than he was accustomed to. He was free to be, free to serve, free to go wherever God asked him to go.

History is replete with such stories. Millard Fuller was a wealthy Alabama businessman. But he gave it all away to join an egalitarian community in Americus, Georgia, and started Habitat for Humanity. He’d felt the press to provide for his family. What he provided, instead, was an exemplary life of holiness and devotion to God and God’s people.

Francis would say it’s time to confess I am Enough. I am God’s child. I am God’s emissary. I am on a lifelong mission for God. It’s not about accumulating for me. It’s about joyful abandonment for God. What does God ask of you, today? More. Enough already. More for God. More prayerfulness. More holiness. More service. More joy.